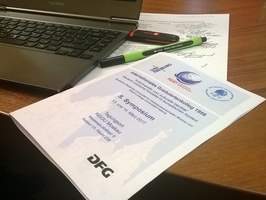 5th Symposium of the German-Russian IRTG 1956 at RGGU Moscow

(27.03.17) In mid-March, the German-Russian IRTG 1956 held its 5th symposium at the Russian State University for the Humanities (RGGU). The Research Training Group, which was formally inaugurated in Moscow in 2015 by a prominent delegation, is based at RGGU and the University of Freiburg.

Within the group, entitled “Cultural Transfer and ‘Cultural Identity’ – German-Russian Contacts in the European Context”, three generations of researchers have investigated the long tradition of national, bilateral and international research on German-Russian cultural contacts and the European dimension of these contacts. The intention is to develop an innovative concept of interdisciplinary and international culture transfer research on this basis. The group will also study the extent to which processes of cultural transfer impact on constructions of cultural or national identities. The period under investigation stretches from the late 17th century to the present day.

In addition to an introductory address by the group’s German spokesperson, Prof. Elisabeth Cheauré, and the co-spokesperson in Russia, Prof. Dirk Kemper, who holds the Thomas Mann Chair, the director of the DFG’s Moscow office, Dr. Wilma Rethage, also welcomed participants at the opening of the two-day event. She emphasised the importance, “in times of ‘alternative facts’ and burgeoning populism, of intelligent minds which understand the mechanisms of how we act as individuals and societies, construct ourselves through culture, language and identity, but also perhaps stimulate, influence or even manipulate one another.”

The DFG is currently funding around 209 Research Training Groups, of which 40 are international RTGs. IRTG 1956, based in Freiburg and Moscow, is the first German-Russian Research Training Group in the humanities. However, the DFG has been funding bilateral RTGs with Russia since 2006, for example a life sciences RTG between Moscow’s Lomonosov University and the universities of Giessen / Marburg (IRTG 1384). Russian co-financing for the research training programme has normally been provided by the Russian Foundation for Basic Research (RFBR) and the former Russian Foundation for the Humanities (RFH).

Research Training Groups such as IRTG 1956 are university-based institutions designed to support early career researchers, which can receive DFG funding for up to nine years. Their main aim is to train doctoral researchers within a thematically focused research programme and a structured qualification programme. They are designed to provide intensive preparation for the complex world of professional research while encouraging early independence.

International Research Training Group 1956 (in German and Russian only):

DFG Moscow: Inauguration of the First German-Russian IRTG in the Humanities: