Annual Report for 2015 from the DWIH Moscow 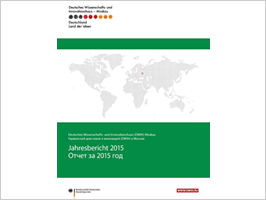 (22.04.16) In April the German House for Research and Innovation (DWIH) in Moscow published its fourth annual report on the activities of German research and funding organisations in Russia. Despite changes in the political situation, the member organisations of the DWIH and the German Research Foundation (DFG) succeeded in organising a number of bilateral events again in 2015.

This year the DWIH has again provided an important framework within which German universities and research institutions and individual researchers could present themselves. An important item covered in the annual report is the fifth German-Russian Week of the Young Researcher, which was held at the Moscow Institute of Physics and Technology (MIPT). The delegates numbered more than 80 and included young and experienced mathematicians such as the DFG Leibniz Prize winner Günter Ziegler (Free University of Berlin) and also the DFG Vice President Peter Funke (University of Münster) and the Rector of the Technical University in Ilmenau, Peter Scharff.

Another highlight, from the point of view of the DFG, was the first Leibniz lecture organised jointly with the Russian Foundation for Humanities (RFH).The lecture was given by Hartmut Leppin (Goethe University in Frankfurt) at the Russian State University for the Humanities in Moscow. There was also more bilateral collaboration in St. Petersburg, the "northern capital", with informational seminars and lectures in engineering sciences at the Polytechnical University with the participation of the DFG Senator Johannes Janicka (Technical University of Darmstadt).

The descriptions of many events at the DWIH are preceded by welcome speeches from Margret Wintermantel, the President of the German Academic Exchange Service (DAAD); Peter Strohschneider, the President of the German Research Foundation (DFG) and the Ambassador of the Federal Republic of Germany to the Russian Federation, Rüdiger Freiherr von Fritsch.