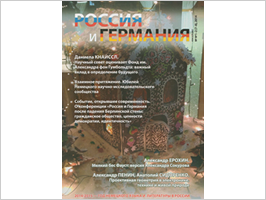 (28.01.15) The new issue of the "Russland – Deutschland" scientific journal has two articles from the Deutsche Forschungsgemeinschaft (DFG, German Research Foundation) under the heading "Science as a bridge between our countries". They report on the first Leibniz Lecture in St. Petersburg held by the mathematician Günter Ziegler from the Free University of Berlin and on some of the DFG's other activities in Russia, such as the celebration of the 10th anniversary of the DFG Office Russia/CIS in Moscow.

The Editor-in-Chief is Professor Tatjana Ilarionowa whose research has been funded in part by the Alexander von Humboldt Foundation and the DFG. In 2011 she received the "Humboldt Alumni Award for Innovative Networking Initiatives" for the foundation of her journal. It was presented by Angela Merkel, the Federal Chancellor. The journal is a platform for academic dialogue between the two countries covering topics in every area of basic research and provides an outlet for views from the worlds of science and politics.