(11/30/18) Only a few cities in the US have the capacity to host a conference with more than 30,000 attendees. The impressive waterfront conference center in San Diego is one of these one of these and from November 3-7, 2018 neuroscientists from across the globe gathered in sunny California for the 48th Annual Meeting of the Society for Neuroscience.

As in previous years, presentations, symposiums and workshops set the tone of the conference. But the defining character of the SfN is best understood through the poster sessions in the large exhibition hall, where young investigators present their research with great enthusiasm. Over 13,000 posters were on display at the conference this year. 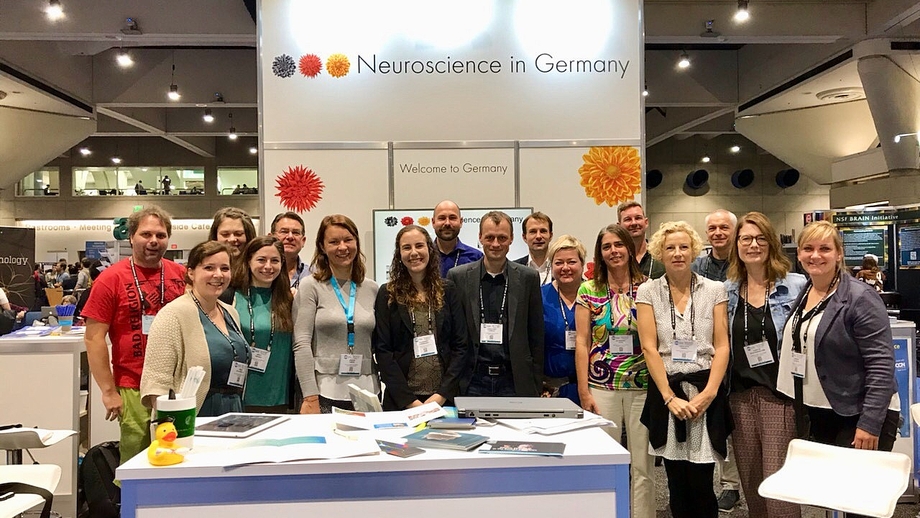 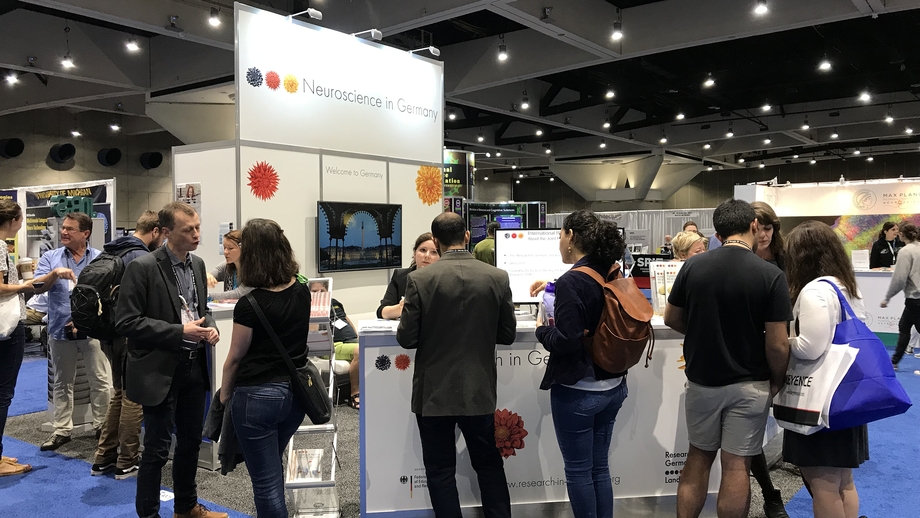 Visitors at the booth 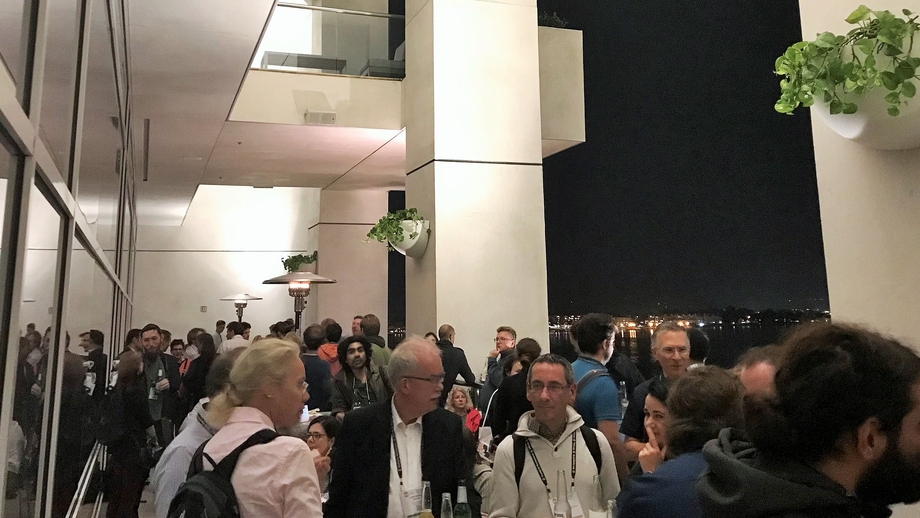 Impressions from the SfN

Aside from the many poster sessions, the crowded exhibition hall also included the prominently displayed “Neuroscience in Germany”. Staff onsite included numerous representatives of institutions like the German NeuroCenters (Clusters of Excellence as well as DFG-funded collaborative research centers), the German Graduate Schools for Neuroscience, the Bernstein Center for Computational Neuroscience Berlin, the Einstein Center for Neurosciences Berlin, the Hertie Institute for Clinical Brain Research (HIH), as well as the Max-Planck-Society. Participants of the “Research in Germany” initiative included the American Friends of the Alexander von Humboldt Foundation (AvH), the German Academic Exchange Service (DAAD) and the German Research Foundation (DFG).

The joint Neuroscience booth was established in 2014 and has proven to be extremely successful for all participants. The booth also has grown steadily over the years: initially existing only as a “German Row” of booths with the Bernstein Center for Computational Neuroscience Berlin and the German Graduate Schools for Neuroscience, the booth was expanded with the participation of the "Research in Germany" initiative and the NeuroCenters. In the last two years, the Einstein Center for Neurosciences Berlin (2016) as well as the Hertie Institute for Clinical Brain Research (HIH) and the Max Planck Society (2017) joined the booth as the newest members of the joint “Neuroscience in Germany” booth.

Visitors at the booth

By joining forces, the booth became a one-stop-shop to Germany with a wide selection of offerings ranging from doctoral programs, short-term stays and funding opportunities for international cooperation to visiting professor positions, graduate programs and open job positions. All in all, the representatives at the booth met with almost 600 visitors in four days, a sign that interest in Germany remains high. One US researcher visiting the booth explained “I did a course for my Master’s degree in Germany and I enjoyed it so much that I want to send all my friends to Germany, too.”

The wide range of visitors to the booth included not only undergraduates but also Deputy Consul General Kathrin Steinbrenner and current Thomas Mann House Fellow in Los Angeles Prof. Dr.-Ing. Yiannos Manoli, Director of the Fritz Huettinger Chair of Microelectronics and Director of the Hahn Schickard Institute of Micromachining and Information Technology. Informational material on funding opportunities, open positions and the many neuroscientific institutes in Germany was highly sought after: "I was just offered a PostDoc position in Munich this morning and I am so excited. Please, tell me everything I need to know and what to expect in Germany," proclaimed an excited participant. It was remarkable to see the real-life success stories thanks to the "Research in Germany" initiative.

On Monday evening, DFG Leibniz Prize awardee Prof. Dr. Magdalena Götz, from the Institute for Stem Cell Research, Helmholtz Center Munich and Biomedical Center, University of Munich, presented her lecture „Link auf PDF-DateiMechanisms of Neurogenesis and Neural Repair” to a packed audience. Following a brief introduction by Dr. Rainer Gruhlich, Director of the DFG North America Office, Prof. Götz discussed her latest findings regarding novel mechanisms of how neurogenesis is regulated in the developing and adult brain and the options for using this knowledge for repair. Among the numerous participants in the audience were Leibniz Prize winner Prof. Frank Bradke as well as previous postdocs of Dr. Götz´s.

The Leibniz Lecture was followed by the traditional German Social, this year jointly organized by the "Research in Germany" initiative and the Hertie Institute for Clinical Brain Research. A crowd of more than 200 guests gathered on the outdoor terrace of the Hilton overlooking Coronado and the San Diego Bay and exchanged ideas and contacts among scientists interested in research cooperation with and career opportunities in Germany.

Monday evening’s guests, like the visitors to the booth and even other exhibitors, made mention of how wonderfully Germany was represented at the conference.