Peter Strohschneider at the University of California, Berkeley 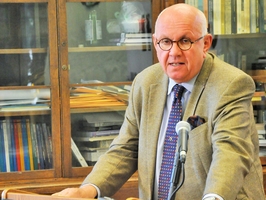 DFG President Peter Strohschneider at the University of California, Berkeley

(09/25/17) During his recent visit to the United States, Peter Strohschneider, president of the German Research Foundation (DFG), accepted an invitation by the Director of the German Historical Institute (DHI) in Washington, DC, Simone Lässig, to give a lecture at DHI’s new West Coast branch at the University of California at Berkeley. This event was sponsored by the DFG in cooperation with the Center for Science, Technology, Medicine & Society, the Institute of European Studies, the Center for Higher Education Studies and the Departments of History and German Studies at the University of Berkeley.

The controversial topic, which Strohschneider discussed in his speech “The End of the Endless Frontier? Truth and Power in the Age of Populism" provided a solid foundation for a fruitful discussion. The title was a reference to the landmark report by Vannevar Bush to then US President Truman ("Science, the Endless Frontier"), which is widely considered as the basis for publicly funded research in the US after World War II.

According to Strohschneider, publicly funded research had grown almost explosively during World War II - often against the will of academia, which feared that growing funds might go hand in hand with growing political influence. In his report, which distilled the lessons of wartime into proposals for subsequent federal support of science, V. Bush affirmed the question as to whether technological progress and thereby civilizational progress could be achieved through high public investment in research during the post war period.

The conditions that Bush excluded in his approach – for instance a general mistrust between science and society - therefore are likely to come back to haunt us. According to Strohschneider it is therefore necessary to build a renewed and more sustainable relationship between science and society to avoid the potential pitfalls of false promises and decreasing methodological rigor. This would be a more appropriate response by the scientific communities in regards to populist tendencies and the inability to converse based on intersubjective facts – rather than the example of the well-intended Marches for Science this year. Power itself cannot determine what is true and what is false, so too science cannot determine the guiding principle of societal processes, especially given its often provisional results: “The scientocratic response [to populism] does not see that political power is legitimated not through truth but through majorities and the constitution.”

The topic may have been a sensitive subject for the academic setting, but nonetheless, the participants agreed on the importance of discussing this controversial topic, especially since it cannot be in the interest of science to defend itself based on the wrong arguments.

At the end of his visit to Berkeley, Mr. Strohschneider visited the local Department of German Studies. While enjoying coffee and cake, the talks focused on the differences in research funding on both sides of the Atlantic. Strohschneider concluded once again with reference to Vannevar Bush: though envious of the National Science Foundation (NSF) in terms of budget, Strohschneider doesn´t begrudge them their degree of political autonomy.

View a recording of the event

DFG President Peter Strohschneider„The End of the Endless Frontier? Truth and Power in the Age of Populism”