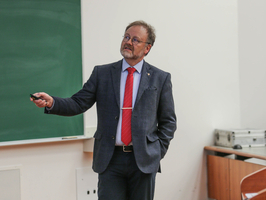 Holger Braunschweig during a Leibniz Lecture

(05/18/17) On May 2 and May 3, the University of Ottawa hosted Holger Braunchschweig, head of the Department of Chemistry at the University of Würzburg, Germany, as part of a Leibniz Lecture Tour, organized by the Deutsche Forschungsgemeinschaft (DFG, German Research Foundation).Leibniz Lectures are delivered by recipients of the prestigious Gottfried Wilhelm Leibniz Prize, the highest honor awarded by the DFG.

The activities on campus included a workshop at the Department of Chemistry and Biomolecular Sciences with doctoral students from seven different research groups. The workshop was followed by Dr. Braunschweig’s lecture entitled “Turning Boron Chemistry on its head: The unusual chemistry of boron in low oxidation states,” which marked the closing of the high-caliber events at the uOttawa Center for Advanced Materials Research. The large audience listened attentively as Dr. Braunscheig described the impressive scientific originality of his research and the significance of modern boron chemistry at the University of Würzburg and the newly founded "Institute for Sustainable Chemistry and Catalysis with Boron (ICB)."

Both Sylvain Charbonneau, Associate Vice President, Research, and Elisabeth Hornung, First Secretary of the German Embassy, underlined the many fruitful ties between uOttawa and German institutions and the importance of Canadian-German scientific collaboration in their opening remarks. Annette Doll-Sellen, DFG New York, spoke further on the history and importance of the Leibniz Prize during her introduction.

Concluding the tour, a visit to the Max Planck – University of Ottawa Centre for Extreme and Quantum Photonics and a lunch in honor of the prize winner at the German Embassy were the perfect ending to a successful visit to Ottawa.

Leibniz Lecture with Holger Braunschweig at the University of Ottawa