„Research in Germany“ at the Experimental Biology (EB) 2017 in Chicago

(05/04/17) The optimistic mood inside the McCormick Convention Center – thanks to recent advances such as CRISPR/Cas and aptly reflected in the Experimental Biology´s motto “Transforming the Future through Science” – was a stark contrast to the current political climate beyond the walls of the exhibit hall, which is why quite a few of the 13,000 EB participants chose to join the estimated crowd of 40,000 in the local March for Science on April 22 - the first day of the conference. 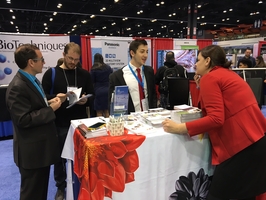 Several scientists from a variety of German research institutions and different career stages volunteered to help staffing the booth, thus adding their valuable expertise on cutting-edge research institutions in Germany. They were able to make a strong case for how to further a scientific career that started here in the US by joining the German research enterprise. As one of the scientists present phrased it: „We are excellent and we are always looking for excellent people“.