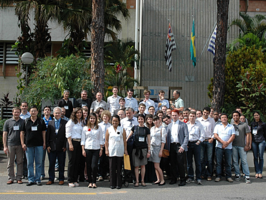 (05.11.20) Collaborative and interdisciplinary research is becoming increasingly successful worldwide. The exchange of ideas that emerges as a result of varied academic experience has proved productive not just for the scientific community but for society as a whole.

In 2020, the first International Research Training Group (IGK) was completed in cooperation with Brazil. The DFG funded this group together with its Brazilian partner organisation FAPESP (State of São Paulo Research Foundation).

The German word Netz is derived from the Old High German nezzi. The latter is thought to have its origins in the Latin word nodus (knot), so the original meaning would have been “that which is knotted or tied”. Networks exist in very different forms. Our brain has a network structure, for instance, while other types of network are to be found in meteorology, regional electricity grids and even social media. These are all good examples of network-type structures. In view of this diverse range of possibilities, physicists, mathematicians, climatologists, biologists and geographers from the Humboldt-Universität zu Berlin (HUB), the Potsdam Institute for Climate Impact Research (PIK), the Universidade de São Paulo (USP) and Brazil’s National Institute for Space Research (Instituto Nacional de Pesquisas Espaciais, INPE) joined forces in 2011 to form an International Research Training Group (IGK). The aim was to gain an understanding of how large complex systems work in different areas of application – from neuroscience, engineering and the earth sciences through to sociology and economics.

“The effective realisation of our sophisticated interdisciplinary training programme – including extended research stays by all doctoral students in the partner country – has certainly been a hard-fought accomplishment, but also a highly successful one. Hopefully, future International Research Training Groups will be able to build on this,” says IGK spokesperson Professor Jürgen Kurths of the Potsdam Institute for Climate Impact Research. An IGK is a form of doctoral training that combines excellent research with training and joint supervision of both the German and foreign doctoral researchers. Projects of this kind can last up to nine years (two phases of 4.5 years each) and are coordinated by university lecturers in both countries. The programme enables German and foreign universities to develop and coordinate a joint research project with a broad-based or interdisciplinary topic; within this context they offer doctoral candidates a highly qualified, research-oriented training structure including courses and individual supervision. The prerequisite for this is that the participating doctoral researchers conduct part of their research at the respective partner institution abroad, with stays lasting for up to one year for this purpose.

The Research Training Group “Dynamic Phenomena in Complex Networks” was the first international group of its kind to be run jointly by researchers from Germany and Brazil, and initially it took some time to successfully coordinate two systems of doctoral training that differ both administratively and culturally. The IGK coordinator on the Brazilian side, Professor Elbert E. N. Macau of Brazil’s National Institute for Space Research (INPE), describes the situation as follows: “The main challenge was to get people to know each other so that they could gain an understanding of how the other side functions and start to interact.” Professor Macau said that this worked well, and Professor Kurths agrees: “We managed it by means of a concerted effort – and our success is borne out by the fact that so many of our participants did extremely well in their final qualifications. The assistance provided by the DFG and the FAPESP was always a key factor, too.”

The German researchers were funded by the DFG, while the Brazilians received funding from the FAPESP through the Projeto Temático funding programme. One of the main goals of this interdisciplinary IGK was to establish a structured doctoral programme to work on projects in the field of network theory and its various areas of application. The early-career researchers quickly became the “real driving force” behind the IGK, say both Professor Kurths and Professor Macau. The programme included the teaching of modern theoretical concepts and training in network applications, as well as practical experience of the relevant experiments.

The first IGK in cooperation with Brazil lasted approximately ten years and covered four main areas. During this time, a total of 264 articles were published in renowned scientific journals such as Nature, The European Physical Journal, Climate Dynamics, etc. Topics included: general aspects of network dynamics; stochastic dynamics and transport; terrestrial system and neural networks. A total of 87 PhDs were completed in these areas.

One focus of the IGK was to look at the principles of self-organisation in complex networks that vary over time. In order to gain a more realistic view, the group also explored the impact of network heterogeneity, multi-scale temporal delay and stochastic sources.

These theoretical studies were closely linked to the investigation of experimental and natural networks of increasing complexity – from lasers and hybrid neuron networks to the Earth system. The latter poses a particular challenge for network theory and was one of the main topics of the IGK, primarily with the aim of gaining a better understanding of how the Earth’s subsystems function under changing conditions, with a particular focus on factors such as global warming and Amazon rainforest deforestation. There had been isolated bilateral collaborations on these topics even before the IGK started, explains Professor Kurths, but it was only through the IGK that “the cooperation was raised to a much expanded and truly interdisciplinary level”. “Many more colleagues on both sides participated and came together in a very productive way, with close dovetailing of research and teaching. This applies in particular to the cooperation of network science with climatology and neurology,” he says, summarising the success of the programme.

The collaboration also generated some surprising results, including those relating to the methodology of complex networks. Professor Macau explains that in this area “considerable developments were made in terms of the theoretical approach – this proved to be flexible and effective in a wide variety of application situations, always providing an appropriate analysis of the problem in question.”

The programme included dual supervision of each PhD student on the German and Brazilian side, with on-site workshops and practical learning experience as well as the use of innovative forms of learning such as teleconferencing, e-learning and a Wikiversity. In addition, particular importance was attached to the acquisition of social skills. The framework here was provided by the Humboldt Graduate School (HGS) and the equivalent organisation at the University of São Paulo (USP).

A final event was planned for March this year but had to be postponed due to the coronavirus pandemic. The success of the first International Research Training Group in Brazil gives rise to positive expectations that new groups can be formed in other areas. In addition to the FAPESP in Brazil, CONACYT in Mexico and CONICET in Argentina are also partners in the successful joint promotion of International Research Training Groups.