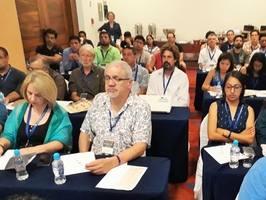 (03.11.17) At the annual meeting of the Mexican Geophysical Union (Unión Geofísica Mexicana, UGM), held between 22 and 27 October in Puerto Vallarta, the Deutsche Forschungsgemeinschaft (DFG, German Research Foundation) gave a presentation at a Research in Germany information event. The geophysics association was founded in 1960 with the objective of boosting basic and applied research into earth and space sciences. Scientific collaborations and the dissemination of knowledge play a key role here. Mexico’s most important geoscientific event and one of the biggest in the field in Latin America therefore provided a suitable forum for a Research in Germany lunch session on research and funding opportunities in Germany. It was organised by the DAAD branch office in Mexico and took place on 24 October.

DFG Liaison Scientist in Mexico Dr. Christina Siebe from the Institute of Geology at the National Autonomous University of Mexico (Universidad Autonoma de México, UNAM) outlined the DFG funding instruments for international cooperation to the audience of around 50 people. The programme also included talks by Susanne Faber, Head of Marketing at the DAAD in Mexico, and Claudia Treviño, the Alexander von Humboldt Foundation’s Liaison Scientist at the Institute of Biotechnology at UNAM, who provided the audience with information on her organisation’s fellowships. The attendees, who were mainly from Mexico, comprised students on Bachelor’s and Master’s courses, doctoral researchers and a significant number of experienced researchers. The latter were highly interested in the DFG programmes for bilateral research cooperations and were offered in-depth advice from Dr. Siebe.

In 1991, the DFG signed an agreement with CONACYT, its Mexican partner organisation. This was renewed in 2014 and used as a basis to fund German-Mexican research projects.