(28.09.17) How can new imaging techniques help to improve the diagnosis and treatment of cancer? German and Brazilian researchers in engineering and life sciences addressed this question at a workshop held on the campus of the Faculty of Medicine at São Paulo State University, UNESP (Universidade Estadual Paulista), in Botucatu, São Paulo.

Around 35 researchers took part in the workshop

The event, which took place between 20 - 23 September in Brazil and followed on from an earlier workshop in Erlangen in November 2016, was attended by researchers from universities in the state of São Paulo and from Friedrich Alexander University of Erlangen-Nuremberg (FAU). Both workshops were funded through a competitive bidding process by FAPESP and Baylat to foster scientific cooperation between the Brazilian state of São Paulo and the German state of Bavaria.

Prof. Dr. Christoph Korbmacher, former Vice-President of FAU, visited the UNESP Faculty of Medicine in Botucatu in 2012, and in the following year an institutional partnership was established between the two universities. The two events are a result of this partnership and serve as a basis for future joint research projects. “To intensify the collaboration, it’s vital to stay informed about available funding opportunities and familiarise ourselves with them so that we can identify the most suitable option,” explained Prof. Silke Weber from UNESP, who organised the workshop.

Carolina Santa Rosa from the DFG Office Latin America gave a presentation explaining what opportunities were available for bilateral project funding, with a focus on joint funding opportunities with FAPESP. 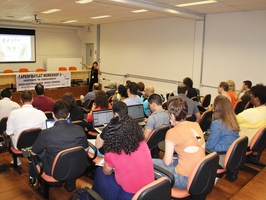 Prof. Regine Schneider-Stock from the Institute of Pathology at FAU spoke about her research work

There was particular interest in the Coordinated Programmes offered by the DFG. Because these programmes promote a highly interdisciplinary approach to research, it is possible to bring together multiple projects from different areas which address a common topic. During the workshop, which was entitled ‘Understanding Cancer Cell Aggressiveness with Novel Imaging Techniques’, researchers presented their work in medicine, biomedicine, veterinary medicine, pharmaceutics, biochemistry, computer technology and IT.

Prof. Ana M. da Costa Ferreira from the Institute of Chemistry at the University of São Paulo underlined the importance of dialogue with other scientific disciplines: “My knowledge is limited to chemistry. Obviously this means there are certain boundaries, but these can be redefined, for example when a problem that is hindering my own research can be easily solved by someone from a different discipline. Exposing your own research project to the scrutiny of others also opens your eyes to things you wouldn’t have spotted yourself. At this point, boundaries are overcome,” said Prof. Ferreira, who presented her work on the use of confocal Raman microscopy to monitor intracellular changes following cancer treatment on the basis of metal compounds.

The event in Botucatu also included practical examples of potential cross-disciplinary collaborations, specifically taking account of needs in Brazil. For example, dermatologist Prof. Juliano Vilaverde Schmitt from UNESP pointed to the need for early detection of malignant melanomas, as there are currently no effective treatments for advanced stages of this type of cancer. “Early detection of melanomas requires dermatologists and well-trained assistants. In our public healthcare system, there is a lack of such assistants, especially in more rural areas. The development of image recognition technologies, which can spot a potential melanoma using photos taken by the patient with a smartphone, would be extremely useful. This would result in a higher early detection rate and therefore reduce the number of deaths,” he said.