(18.09.17) The Research in Germany initiative provided information on research and cooperation opportunities in Germany during the 15th Brazilian Congress for International Law (Congresso Brasileiro de Direito Internacional – CBDI) in Florianópolis. Representatives of the DFG and the DAAD were in attendance on 30 and 31 August 2017 to provide interested parties with advice on research and funding opportunities in Germany.

Maxi Neidhardt informed the audience about the DFG's funding programmes

During the congress there was also an information event on the topic of "Research in Germany" during which funding, exchange and cooperation programmes were presented. Maxi Neidhardt from the DFG Office Latin America introduced the DFG and informed the around 60 attendees about the opportunities for project funding as well as existing cooperations with Brazilian funding institutions. The programme was complemented by a DAAD talk and information on the Alexander von Humboldt Foundation. The contribution by Prof. Claudia Lima Marques from the Faculty of Law of the Federal University of Rio Grande do Sul (UFRGS), who detailed her experiences as a master's student, doctoral researcher and postdoctoral researcher in Germany and explained the benefits of these posts for her career in research, gave the audience a special insight into the German research landscape. 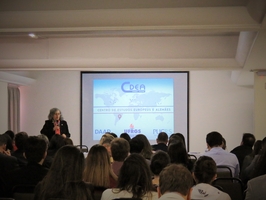 Prof. Lima Marques leads the Centre for German and European Studies (Centro de Estudos Europeus e Alemães – CDEA) in Porto Alegre and presented the institution in her talk. The researcher, who has been working with colleagues in Germany – including at the universities of Heidelberg and Gießen – for many years, emphasised the interdisciplinary nature of the CDEA. "We want to research the current issues of cultural diversity, sustainability and globalisation using an interdisciplinary approach, in particular involving researchers from the areas of law, philosophy, sociology and politics in the process," said Lima Marques. The centre is the first of its kind in the Southern Hemisphere and is supported by UFRGS, PUCRS and DAAD with funding from the German Federal Foreign Office. 58 researchers from 20 different doctoral and master's programmes are currently part of the CDEA which has concluded cooperation agreements with German universities and facilitated scientific dialogue.

For the 15th time, the Brazilian Academy of International Law brought together renowned lawyers, government representatives, students and researchers from Brazil and abroad at the congress, which this year had the motto "Transdisciplinarity in International Law".