(24.08.17) On 9 August, researchers and professors from the Getúlio Vargas Foundation (FGV) had the opportunity to learn more about the DFG’s work and activities in Brazil at the 3rd Colloquium for Applied Research. Kathrin Winkler, director of the DFG’s Latin America office, was invited to speak about the DFG and its funding programmes as part of a panel on ‘Funding Opportunities: Funds and Interests of International Agencies’. Addressing an audience of around 120, she spoke about cooperation with Brazilian partner organisations, funding opportunities for initiating collaborations between researchers in Germany and Brazil, and successful bilateral projects. 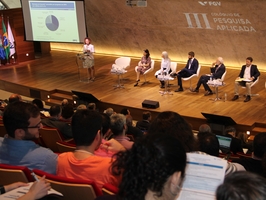 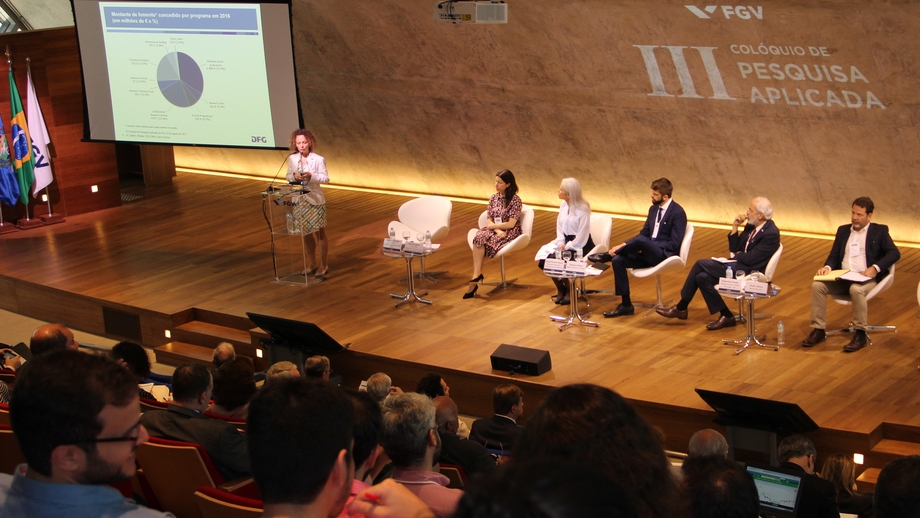 Audience at the colloquium: researchers from the Getúlio Vargas Foundation (FGV) 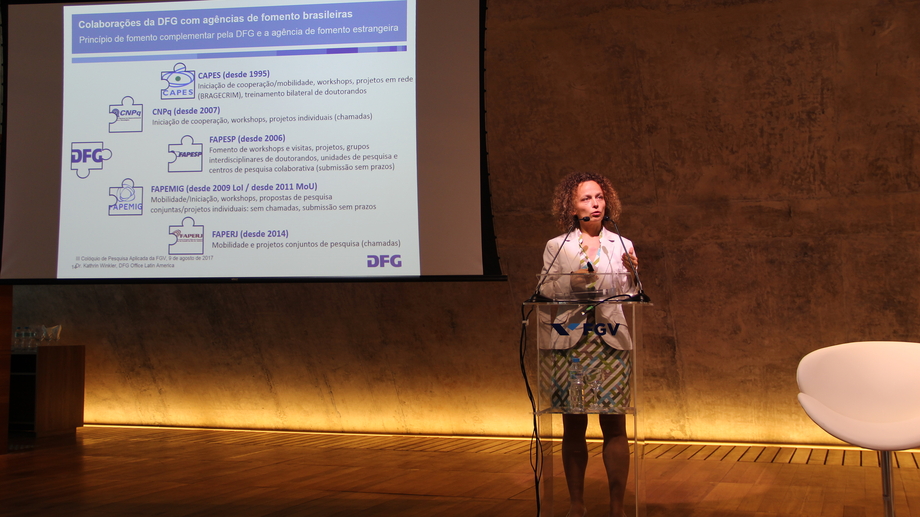 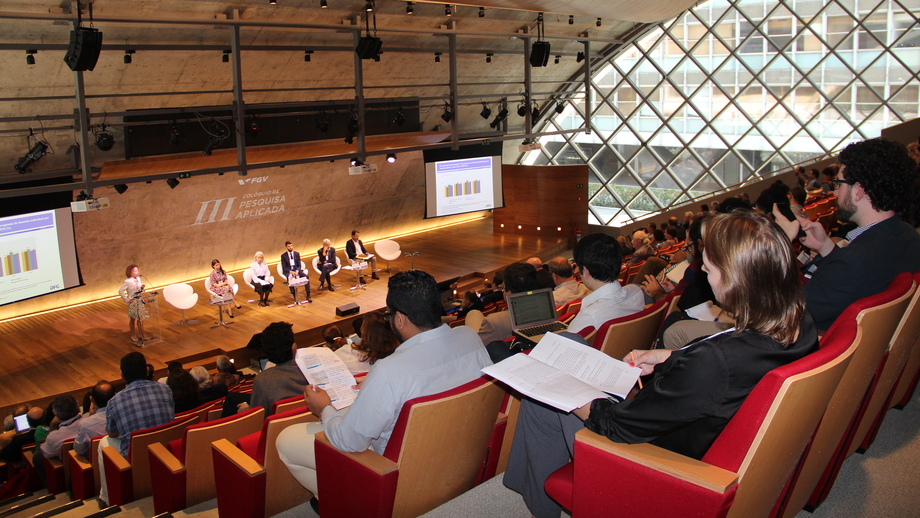 Speakers at the panel on international research funding 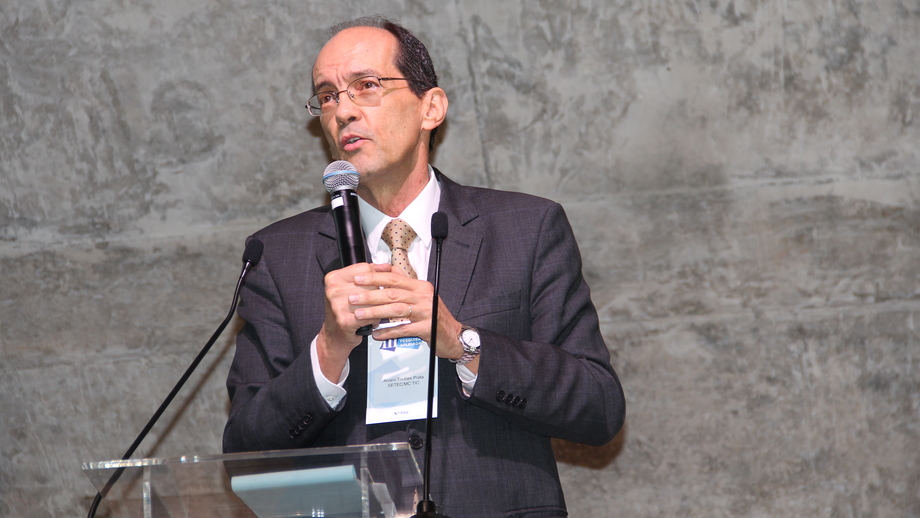 Impressions of the colloquium

Audience at the colloquium: researchers from the Getúlio Vargas Foundation (FGV)

The panel also highlighted new options in the light of the current funding crisis facing Brazil, which has directly impacted on FGV’s research budget due to the loss of public funding. In 2016, 16% of funding (R$3.1 million) derived from public sources such as CNPq, CAPES and FAPESP, all partner organisations of the DFG. Last year, public funding accounted for three times this proportion (R$10.8 million).

The situation forced the foundation to find new sources of funding, which it successfully achieved. “Despite the economic recession, in 2016 we were able to increase the total volume of funding received by 12.5%. We have reoriented ourselves from the public sector towards private, semi-public and international organisations,” reported the President of FGV, Carlos Ivan Simonsen Leal. Last year, 40% of funds came from the private sector and 33% from international institutions such as the EU and the World Bank.

FGV has been actively involved in research for 70 years and is today the most respected institution in applied research, especially in the fields of sustainable development, economics, culture and society, administration, governance and policy.

Although FGV – which also offers undergraduate and postgraduate courses – is already highly regarded, the President intends to give it an even more prominent profile in research. “Money is important, but it’s not everything. We need to administer funds more efficiently: there needs to be a careful correlation between supply and demand,” said Leal. He believes that the definition of priority research areas, as in the EU programmes, is essential. With this in mind, the colloquium was rounded off by a panel on completed research projects with especially high social impact.

This contribution by the DFG in Latin America to an FGV event is intended to be the first step towards further cooperation between the two organisations. 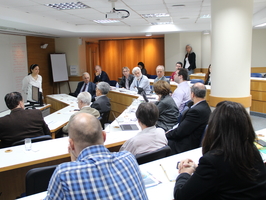 Workshop with mathematicians from FGV and epidemiologists from Fiocruz

Interfaces between mathematics and life sciences

The day after the colloquium, a workshop was held for FGV researchers in applied mathematics and researchers from Fiocruz, a renowned Brazilian research institution in biosciences, which is especially concerned with neglected tropical diseases.

The event was designed to strengthen existing cooperation between the two institutions and stimulate new networks for collaboration. “We want to become more familiar with the projects and objectives of researchers from both institutions and identify interfaces for shared interests,” says Cesar Camacho, a professor of mathematics from FGV.

The unusual collaboration between researchers in mathematics and life sciences has already produced concrete results with social benefits. One example is the Info Dengue initiative, a system which records and maps dengue cases and thus supports efforts to combat the disease in Rio de Janeiro. Researchers collaborated to develop a website that provides information about the risk of infection in the most seriously affected areas of the city and accelerates the initiation of necessary measures. The participating researchers have also created a similar system for the flu virus.

During the workshop, plenty of further opportunities for future cooperation were identified. Fiocruz researcher Marcelo Pelajo Machado proposed an interesting approach: “We have an abundant collection of histopathological samples for yellow fever. These consist of liver tissue from deceased individuals with symptoms of the disease, collected since 1921 and associated with patient information. In addition to this, we have an extensive zoological collection of disease-carrying mosquitoes with geographical data. By combining this data, we could improve our understanding of vectors and the development and spread of the disease over time. This would generate new data which could be examined, for instance, in relation to a climate research question. For example, how have changing temperatures affected mosquitoes and yellow fever epidemics? Mathematical research at FGV could bring us closer to finding answers to this question.”

This proposal met with interest from FGV researchers, who also pointed to potential for cooperation on systems to predict epidemics and integrate machine learning in the huge Fiocruz databases.

Carolina Santa Rosa from the DFG Office Latin America was invited to the workshop so that she could learn about concrete examples of FGV’s research work and identify possible areas of collaboration with German researchers.