DFG Discusses Future of Cooperation at Annual Meeting of the SBPC

(25.07.17) Brazil’s research community gathered in Belo Horizonte from 16 to 22 July for the 69th annual meeting of the Brazilian Society for the Advancement of Science (SPBC). A total of around 15,000 participants, including students, doctoral researchers, postdocs, professors and heads of research management in universities, research and funding institutions, came to the Federal University of Minas Gerais (UFMG). For a week, they debated the effects of the current political and economic situation on the various areas of the Brazilian research and innovation landscape in lectures, discussion sessions and workshops. A common thread among contributions was the call for the restoration of the budget of the Federal Ministry of Science, Technology, Innovations and Communications (MCTIC), following the latest cut at the end of March of 44 per cent for the current year.

The DFG took advantage of the event to hold discussions and meetings with its Brazilian partner organisations in order to jointly address the challenges of cooperation in these circumstances and, despite austerity policies, to determine steps not only to preserve cooperation arrangements, but indeed to extend them within the bounds of what is possible. Themed calls for proposals to this end are planned with the federal research funding agencies CAPES and CNPq, including funding for networked bilateral research projects. Cooperation with FAPEMIG, the research funding organisation of the Federal State of Minas Gerais, is also currently being adjusted and consolidated based on the discussions in Belo Horizonte.

As well as arranging for the DFG to attend, the German House for Research and Innovation São Paulo (DWIH-SP) also organised the participation of German universities and the DAAD. Advice on research and funding opportunities in Germany was available from a stand in the exhibition area. “Germany is already an important partner for Brazil in the area of science and technology. The presence of German institutions at the SBPC meeting is of fundamental importance to future relations, particularly because it offers a starting point and contact opportunities for Brazilian early career researchers,” commented Evaldo Vilela, President of FAPEMIG, when he visited the stand. 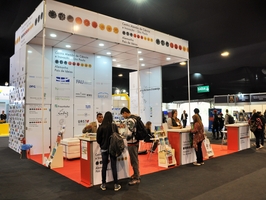 The significance of the partnership with Germany was also highlighted during the delegation's visit with the Rector of the UFMG. The university, which was founded 90 years ago, has announced a targeted expansion of its international activities in the coming years. “We currently have over 40 cooperation arrangements with German universities, and it is our goal to strengthen and expand these arrangements,” said Rector Jaime Ramirez. The planned measures include, for example, an exchange of teaching staff. “We hope that the good cooperation between the DFG and FAPEMIG will continue into the future,” he stated, and stressed the value of the agreement between the DFG and the local funding agency for the work of the UFMG, which now has a total of 838 FAPEMIG-funded research projects to its credit.

Focus of the SBPC – Prospects in Light of the Crisis

Providing stronger support for Brazilian universities’ internationalisation efforts is one of CAPES’ declared objectives. Before this year is out, a call for proposals is to be published to that end, with selected initiatives to be funded from 2018. As the successor to the major “Science without Borders” programme, the new programme “More Science, More Development” plans to set a new direction: instead of restricting themselves to promoting mobility, universities are to have a more central role. The implementation of concepts developed by the universities internally for expanding and making connections with international contacts is to be funded selectively for a period of four years. The general programme for the internationalisation of postgraduate courses of study is to be continued for all non-funded institutions with the familiar CAPES funding lines (fellowships for full doctorates abroad and research visits during doctorates, as well as postdoctoral fellowships). “This year CAPES awarded 4,600 fellowships for research visits during doctorates, half as many as during the four-year total duration of the “Science without Borders” programme, Abílio Neves, President of CAPES, told the audience in his lecture.

Visit of the German delegation with the Rector of the UFMG, Jaime Ramírez (6th person from left to right)

He presented figures showing that, of the 213,000 students in postgraduate courses of study (master’s and doctorates), around 100,000 receive CAPES funding. CAPES answers to the Brazilian Education Ministry (MEC), and its budget in 2017 is R$ 4.5 billion. Hence, it is less affected by cuts than the CNPq national research council, which is attached to the Science Ministry (MCTIC). That ministry has a total of only around half those funds at its disposal. Neves describes this imbalance as extremely concerning, since although funding for people in scientific research can be guaranteed by CAPES, project funding through the CNPq has suffered considerable cuts. “We cannot educate scientific personnel if we have no research funding. The budget of the MCTIC, its institutes and agencies CNPq and FINEP urgently requires replenishing,” Neves urges.

In view of the background of budgetary shortfalls in the public sector, the presentation by the first private research funding agency in Brazil met with considerable interest. The Serrapilheira Institute, which has an annual budget of R$ 15 million, provided information about its first call for proposals. In the first funding period, 70 projects in the natural and life sciences are to be provided with seed money for a year. In the second phase, 10 to 20 outstanding projects will receive up to R$ 1 million for a further three years. According to Hugo Aguilaniu, President of the Institute, both its budgetary certainty – the funds are from the income of a private fund in the amount of R$ 350 million – and its more flexible work planning and use of funds for researchers distinguish the Institute from public sources of research funding.