(14.07.17) “I think students and researchers from Germany would be surprised at the outstanding research conditions we have at CINVESTAV – what we have here in Mexico probably compares with the Max Planck Society,” said Prof. Dr. Axel Tiessen, researcher and professor at the Centre for Research and Advanced Studies (Centro de Investigación y de Estudios Avanzados – CINVESTAV) in Mexico. DFG General Secretary Dorothee Dzwonnek and the head of the Scientific Affairs department at the DFG, Dr. Annette Schmidtmann, were more than happy to endorse that assessment during their stay in Mexico. The DFG delegation visited CINVESTAV in May, and came away most impressed by its excellent research infrastructure and high scientific standards.

The Centre was established in 1961 as a state institution with the goals of becoming a leader in basic and applied research and providing training for top researchers in science and the humanities and technology. CINVESTAV, with a total of ten locations in Mexico, focusses on the research areas of natural sciences, biology and health sciences, technology and engineering, as well as the humanities and social sciences. The institution offers 31 master’s and 33 doctoral study programmes, in which 3,000 students, both domestic and international, are enrolled. The 650 professors located there award around 500 master's degrees and 300 doctorates each year.

Prof. Dr. Tiessen is a researcher in the Department of Genetics. He is a Mexican whose grandparents were German immigrants. He obtained a degree in biology in Germany, and was also awarded his doctorate there in the subject area of molecular biology and plant physiology. During the course of his scientific career, Prof. Dr. Tiessen's research has also been funded by the DFG, the largest research funding organisation in Germany. In addition, he has worked as a reviewer on behalf of the DFG.

The international orientation of the Centre, which boasts a significant number of people with international experience in research and teaching, is another important aspect. Overall, over 200 cooperation agreements exist with 155 highly regarded universities and research institutions in 30 countries. Germany plays a significant role in this area, which is a reflection of the fruits of cooperation with German institutions over the past ten years. These arrangements have generated over 1,300 joint publications, which have been cited over 40,000 times within the global scientific community.

“We constantly have international guests in our research group, naturally including guests from Germany. Our longest stay was a postdoc, who was with us for two years, but we regularly have short visits from students or visiting researchers,” explains German researcher Dr. Andreas Köster, who has been working in the Department of Chemistry for the last 15 years. “For me personally, CINVESTAV is a great stroke of luck, because I enjoy a very large degree of academic freedom here and have been able to carry out the research that I wanted to do. I wasn't so strongly involved in organisational and academic activities and was therefore able to concentrate on my research. This meant that we were able to establish theoretical chemistry very successfully here at CINVESTAV,” says Köster. 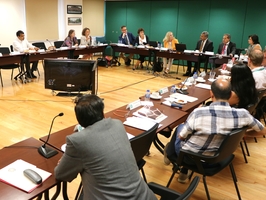 Scientific event at CINVESTAV with presentation of the institution, the DFG and the research activities of individual researchers in collaboration with Germany

During its visit, the DFG delegation was introduced to selected projects by German researchers from very diverse areas of CINVESTAV. For example, plant ecologist Dr. Martin Heil, together with his working group, has developed the first methods for an organic bean that are based on the fact that the plants emit fragrances that make their neighbouring plants resistant. These processes are soon to be patented. Then there is Dr. Michael Schnoor and his working group, who are researching chronic inflammatory disorders and have discovered that a nutritional supplement that contains vitamins and fatty acids can help to mitigate the mechanisms of colitis. “We have verified this in a T model, and are trying to [...] transfer this into clinical trials,” says Schnoor. New technological platforms for chemical analysis are being developed in Dr. Robert Winkler’s laboratory at CINVESTAV – for example, a device with which biomolecules can be ionised under normal conditions, i.e., at ambient temperature and pressure.

German researchers at CINVESTAV are also working in the areas of informatics, pedagogy and education. There are also numerous Mexican scientists cooperating with partners from Germany on the basis of existing institutional agreements. Project proposals were submitted in 2016 for some of these joint research projects as part of the joint call by the DFG and CONACYT. A cooperation agreement has been in place between the DFG and Mexican funding organisation CONACYT since 1991.

Within the context of this productive and wide-ranging cooperation, the DFG delegation presented its funding instruments at CINVESTAV, with particular attention to programmes for early career researchers. Those attending the event showed great interest in a strengthening of relations with German cooperation partners, and stressed the potential that exists for the establishment of an International Research Training Group.

A first step in that direction would be to hold scientific workshops with funding from Germany as part of the regular DFG programmes. The goal is to strengthen the existing German-Mexican cooperation arrangements in order to stimulate joint projects that could be funded on the basis of existing agreements with Mexican funding institutions.