DFG Participates in Brazil Day at German Embassy in Brasília

(10.07.17) On 30 May, the annual Brazil Day organised by the embassy of the Federal Republic of Germany was held in the Brazilian capital. Once again, this year’s guests included German diplomatic representatives and representatives of political foundations and a variety of institutions in the areas of science, culture, trade and industry. The motto for the event, which was also attended by the head of the DFG office in Latin America, Dr. Kathrin Winkler, was ‘Germany and Brazil: Partners in Globalisation’.

Together with representatives of the German Academic Exchange Service (DAAD), the German House for Research and Innovation São Paulo (DWIH-SP) and the political foundations represented in Brazil, Winkler participated in discussions on the topic ‘Technology, Research and Urbanisation’. An introductory speech on the current research policy situation in Brazil was given by Thomas Schröder, Science Counsellor at the German Embassy in Brasília. He also drew the audience’s attention to the progress made on the measures agreed during the bilateral government consultations in 2015 to expand scientific cooperation between the two countries. The science-related obligations agreed on during the consultations are in some cases already underway or have already been completed, in marine research, ATTO (Amazon Tall Tower Observatory) and rare earths, said Schröder. Measures in bioeconomy, another priority area, are currently being implemented, he reported: in November, the first meeting will be held at government level on this very issue and this year’s dialogue event at DWIH-SP will also address this topic.

German diplomatic representatives and representatives of political foundations and a variety of institutions in the areas of science, culture, trade and industry participated in Brazil Day

In this context, Dr. Winkler presented the DFG’s activities in Brazil, including relations with local partner organisations. She emphasised that Brazilian funding organisations are proving to be reliable cooperation partners in spite of the cutbacks they are currently experiencing. Examples include FAPESP in the state of São Paulo and, at federal level, CAPES and CNPq, with which it has been possible to continue current initiatives. According to the head of the DFG’s Latin America office, Germany is playing a key role in the internationalisation strategy of these organisations and new joint projects are already in the pipeline.

The research initiative BRAGECRIM (Brazilian-German Collaborative Research Initiative in Manufacturing Technology), funded by the DFG and CAPES, in which German and Brazilian researchers in manufacturing technology are working together, was quoted as an example of this successful collaboration. This is one of the largest bilateral research initiatives, which since the beginning of 2009, has brought together over 300 researchers from various universities and non-university research institutions in both countries. As part of this programme, which is currently in its third funding period, the DFG has so far provided over €11 million for more than 50 projects. Materials science, industrial engineering, metrology and logistics are incorporated into the German-Brazilian research programme.

Another successful project is the German-Brazilian Research Training Group ‘Dynamical Phenomena in Complex Networks’, which has been jointly funded by the DFG and FAPESP since 2011. The RTG is focusing on theoretical studies on the principles of self-organisation in complex networks that change over time. The German part of the RTG is located at the Humboldt University of Berlin and the Potsdam Institute for Climate Impact Research (PIK). The Brazilian partners are at the University of São Paulo (USP), the University of Campinas (UNICAMP), the Federal University of ABC (UFABC) and the Federal University of São Paulo (UNIFESP). The National Institute for Space Research (Instituto Nacional de Pesquisas Espaciais, INPE) is also involved. This is one of the most highly regarded research institutes in Brazil researching meteorology, climate change, Earth observation, space and atmosphere research as well as aerospace engineering. 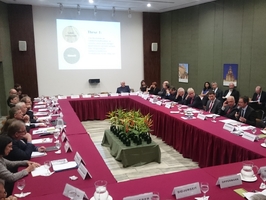 The motto for the event was ‘Germany and Brazil: Partners in Globalisation’

Winkler also emphasised the DFG’s interest in expanding cooperation with funding organisations in Brazil’s federal states, following the example of the collaboration with FAPESP, which has been ongoing for more than ten years. The agreement with FAPESP encompasses the joint funding of coordinated programmes such as International Research Training Groups and bilateral individual projects as well as funding for the development of international cooperation. For the latter funding instrument, last year a joint call was issued for the organisation of specialist workshops to allow initial contacts to be made between German and Brazilian researchers and to enable the identification of potential for bilateral projects.

As well as issues of relevance to research, Brazil Day provided an opportunity to discuss bilateral relations in other areas. In the ‘Industry and Politics’ panel, representatives of German companies in Brazil discussed the challenges facing industry in the face of political and economic difficulties in the country. Agriculture, the environment and the protection of indigenous populations formed another topic area, in which participants focused on cooperation between different areas and their relationships in terms of the conflicts currently in evidence in Brazil. The role of German institutions in mediation and solution-finding processes was also presented. Finally, the participants considered the areas of culture and education, including German language teaching and student exchanges.