Participants in the “Research in Germany” workshop

(21.09.16) From 14 to 19 August 2016, the XXV International Materials Research Congress was held in Mexico. Once again, the annual event was held at the JW Marriott conference hotel in Cancún. After its thoroughly successful participation last year, the Deutsche Forschungsgemeinschaft (DFG, German Research Foundation) once again joined forces with the German Academic Exchange Service (DAAD) to organise a “Research in Germany” information stand and workshop as part of the German Year in Mexico.

With its interdisciplinary programme, the congress offered an interactive discussion forum for exchange on relevant topics such as materials characterisation, materials for energy applications, nanotechnology, soft matter and structural materials, trends in basic research and other relevant materials science subjects.

On Monday, 15 August, representatives of the DAAD, the DFG and the Alexander von Humboldt Foundation were on hand for two hours at the “Research in Germany” stand in the exhibition area to advise attendees on career options and funding opportunities in Germany. Interested parties mainly from Mexico, but also from other Latin American countries and Asia, asked about doctoral and master’s fellowships as well as about funding opportunities for postdocs and research visits by established researchers. 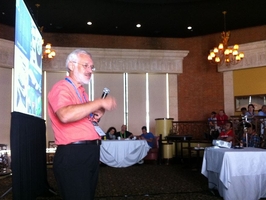 Prof. Brokmeier during his talk

On the following day, the “Research in Germany” information event was held, which with a total of 66 participants was very well attended. Most attendees came from Mexico, but there were also participants from the USA and Colombia, as well as from India, Korea, Brazil, Argentina and Ecuador. The audience consisted of experienced researchers and postdocs as well as doctoral researchers and students. Dr. Alexander Au, head of the Mexican branch of the DAAD, talked about the organisation and funding of research projects with cooperation partners. Dr. Claudia Treviño from the Alexander von Humboldt Foundation presented that institution’s fellowship programmes. After that, the DFG Liaison Scientist Dr. Christina Siebe from the Universidad Nacional Autónoma de México gave an introduction to the DFG and its opportunities for research funding, focussing in particular on the public DFG-CONACyT call for joint research projects. Professor Heinz-Günter Brokmeier of the Institut für Werkstoffkunde und Werkstofftechnik at the University of Clausthal, who had been invited by “Research in Germany”, presented his work, which at the same time offered a fascinating look at Germany as a research location.

In addition, Professor Brokmeier spoke on “Crystallographic Texture Variation Due to Alloying Elements in Magnesium” on 16 August as part of the “Texture and Microstructure” symposium.