(27.10.15) The seventh annual meeting of BRAGECRIM – the Brazilian-German Collaborative Research Initiative in Manufacturing Technology – took place from 13 to 15 October 2015 in the Brazilian state of Rio Grande do Sul.

Delegates at the seventh annual meeting of BRAGECRIM

Following these words of welcome, the first round of presentations on ongoing projects took place. These projects included “Micro-Milling Process Optimisation” with researchers from IPT, the Technical University of Berlin, UNIMEP and UFABC and “Integrating Intelligent Maintenance Systems and Spare Part Supply Chains” involving UFRGS, UFSC, FURG and the University of Münster.

The afternoon saw experts give talks on the topics of bionics and industrial innovation funding with tours of the UFRGS Metal Forming Laboratory and of the Physical Metallurgy Laboratory (LAMEF) run by the Brazilian Enterprise for Research and Industrial Innovation (EMBRAPII). 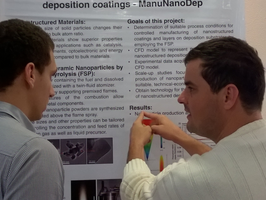 The poster session during the annual meeting

The meeting continued on Wednesday in Bento Gonçalves with talks on the DFG’s work and funding lines, which included a panel consisting of researchers involved and Clarissa Soares, CAPES Programme Director for Germany and Austria, Kathrin Winkler and Ferdinand Hollmann, DFG Programme Director for Engineering Sciences. Experiences of last year’s funding process were exchanged and the aspects researchers need to continue their projects were discussed here.

The second round with presentations on ongoing projects by the BRAGECRIM group involved topics such as “Evaluation of Sheet Metal Covers to Improve Tool Life in Forging”, which is being developed by researchers at UFRGS and RWTH Aachen University and “Development of Wear Resistant and Self-Lubricating Coatings on Sintered Steels from Polymer-Derived Ceramics”, a joint project between UFSC and the University of Bayreuth.

Delegates were also able to share information on results and processes in a poster session. The annual meeting ended with talks within the framework of the first SENAI Industry 4.0 Forum and a visit to a factory run by the Brazilian company Tramontina in Carlos Barbosa, which primarily produces metal goods.

The next meeting will be held in the second half of 2016 in Germany.

BRAGECRIM – the Brazilian-German Collaborative Research Initiative in Manufacturing Technology – is one of the largest German-Brazilian collaborative research initiatives. Over 300 researchers from numerous German and Brazilian universities and non-university research organisations have investigated key issues affecting all stages of the production cycle within its framework. Materials science, industrial engineering, metrology and logistics are incorporated into the German-Brazilian research programme.

Brazilian and German researchers submit funding proposals to CAPES or the DFG respectively, which are jointly reviewed by both funding agencies. The programme is currently in its third funding period and the researchers involved meet every year, alternating the location between Brazil and Germany, to exchange information on the current state of the projects.

Researchers working in the aforementioned fields who are interested in working within the initiative can submit their proposals when the next phase is announced. The next deadline for submitting project proposals is 15 June 2016. Participants must already be collaborating with a Brazilian partner in their project to apply.

For more information on the group, funded projects and announcements, please visit: