The event, entitled "Postdoc at Freie Universität Berlin & Technische Universität München: How to Follow Your Research Career at Two German Top Universities" was held at the Goethe-Institut in São Paulo. Around 40 participants from different universities and research institutions took part, learning about the possibilities of a research visit to Berlin or Munich and how to organise it. Participants were able to find out about career and funding opportunities at these two leading universities, both awardees in Germany’s Excellence Initiative, and in Germany as a whole. There was also the opportunity to talk to other interested researchers and those returning from a period in Germany. 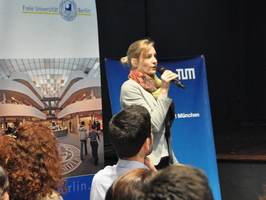 Cornelia Huelsz Müller talks about funding assistance from the DFG

After an introduction by Christina Peters (FU Berlin) and Sören Metz (TU München) and a few words of welcome by Marcio Weichert, the coordinator of the German House for Research and Innovation, Anna Barkausen, director of the DAAD information centre in São Paulo, briefly described the German research landscape and funding opportunities for postdoctoral researchers. Cornelia Huelsz Müller from the DFG's São Paulo office spoke about the funding assistance available from the DFG. A live video link allowed representatives of the universities in Berlin and Munich to talk about the possibilities for postdoctoral research at German universities and the associated organisational issues in Germany.

Round table discussion during the workshop

Using the title "How to get started", video messages from Brazilian researchers at FU Berlin and TU München were shown. Guest speakers Diogo Boito, a former Alexander von Humboldt fellow and a postdoctoral researcher at TU München, and Luciana Villas Bôas, a former Alexander von Humboldt fellow at FU Berlin, also spoke about their experiences in Germany. Finally, the participants were split into expert-led groups according to specialisation. They were especially interested in funding, work and family, and international researcher networks.