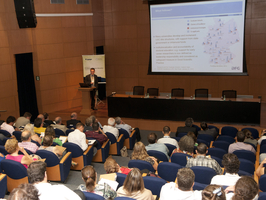 (27.02.14) On 23/24 January, the São Paulo Research Foundation FAPESP organised a two-day symposium on the theme Excellence in Higher Education. The DFG was invited to give a presentation on "Research and the Graduate Schools".

FAPESP invited the organisation to speak about the various aspects and challenges of enhancing quality in research and university education in Brazil, particularly from an international comparison. Prof. Dr. Jorge Guimarães, the president of CAPES, the coordinating body for early career academics, noted the steadily growing number of master's degrees (40,000 in 2013) and doctorates (14,000 in 2013) conferred each year in Brazil, most of which are obtained through quality-certified and regularly evaluated masters and doctoral courses. Prof. Dr. Carlos Henrique de Brito Cruz, research director at FAPESP, pointed out that although quality has significantly improved at the early career stage, in many fields – with the exception of physics – the impact of scientific articles by Brazilian authors or co-authors is declining. Prof. Dr. Luis Davidovich, the vice-president of the Brazilian Academy of Sciences (ABC), highlighted the fact that total investments per student in Brazil are among the lowest in the world and there is also an urgent need for high-quality training for engineers.

Dr. Dietrich Halm, director of the DFG Office Latin America in São Paulo, and Prof. Dr. Colin Grant from the University of Bath were invited to report on programmes to increase academic excellence from the perspective of a European research funding provider and a European university respectively. Dr. Halm spoke about the Excellence Initiative in Germany and in particular the graduate schools, including their goals, implementation and outcomes in both phases of the initiative and how they have impacted and continue to impact on the university and research landscape in Germany.